Every good thing start with a face to face meeting. 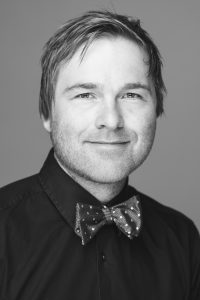 Short biography
Esben Bala Skouboe is born in Randers, Denmark in 1981. He received the Civil engineer in Architecture & Design and a Ph.D. degree in Responsive Public Lighting from Aalborg University in 2015. Esben has investigated a broad range of theoretical, conceptual and practical tools; such as augmented reality, sensor technology, architectural lighting, parametric design and the process of realizing non-standard architectural forms, exemplified in the winning proposal for the pavilion project: Nora, displayed at the 10th Architectural Biennale in Venice 2006.

In 2014 Esben played a central role designing the Future Delivery room at Herning Hospital, and between 2015-2018 Esben headed the start-up of Modos Aps. In this position, he and the team developed mood control solutions to the healthcare sector. Today Esben help clients design and build projects that use advanced technologies with a focus on sensitive design.

Esben’s work has been published at international conferences, in magazines, and in book chapters. see more

As a foundation of Esbens works is a strong belief in using design thinking and radical design techniques to reach new unanticipated trajectories. Esben set an honor in pushing the edge of the possible, and therefore you see a list of serious art references in his portfolio line up.